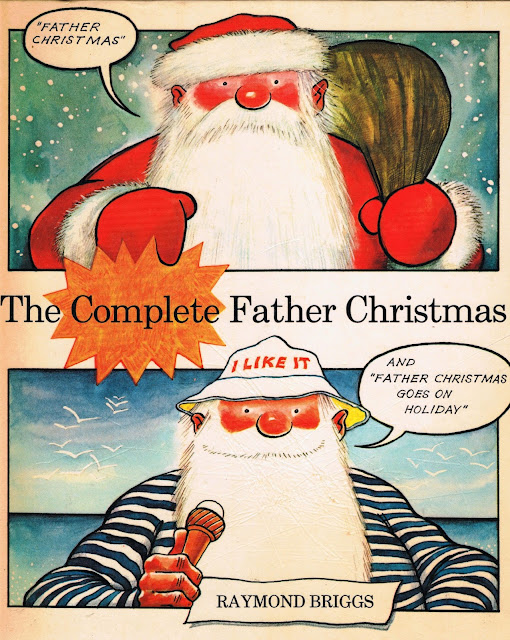 The Complete Father Christmas by Raymond Biggs would have to be one of my all time favourites. If this book doesn't bring a smile to your face, well ,you would have to be a real sour puss. The book contains two stories, told in cartoon strip format, the first called Father Christmas, and the second, Father Christmas goes on Holiday. It's a very grumpy Father Christmas, not really looking forward to his hectic job on Christmas Eve. "Blooming Christmas here again.:"   Later on, it's "Blooming snow," as he looks out his bedroom window in despair. He hates "the blooming cold," the "blooming chimneys, " the "blooming soot," the "blooming aerials," and the "blooming cookers."  Then, after finally delivering all the presents he can relax and check out his presents. What's he received? He unwraps a "blooming awful tie from Auntie Elsie, horrible socks from Cousin Violet.," but... thankfully, good old Fred has come through with a bottle of Cognac. Click on the video below to watch an adaption of the book.

The second story tells of his holiday in France, and sends up the French culture. As soon as people discover his identity it is time for him to move on to Scotland. After experiencing the oddities of this culture and after being recognised yet again he moves on to glitzy Las Vegas. Will he make his fortune here?  Both stories are very funny and provide real chuckles.
Posted by Carolyn Coote at 6:50 PM

Carolyn Coote
Basically I like to have a go at new things, especially in the visual arts area. I love my job teaching but not the paperwork side of things. I firmly believe children need to be given time to do things well and not rush from one thing to another. STOP I say...give a person time to do something properly!